Posted on October 11, 2012 by sandiebrischler

A double DVD of the project and its results has been produced by Sandie Brischler (project coordinator). These films relate the whole working process over 2 years (2010-2012), the several workshops and meetings between the diferent countries, the work on the final performance and the presentation of the performance in the theater “Centro das Artes” in Madeira, with the Dancing with differences group and all the partners and target groups of the project.

This DVD is a experimental, artistic documentary work about the project. It shows a huge panel of artistic tool and creative way of working with mix-ability groups. It can be used as pedagogic tool in several fields of work (education, artistic, social and therapeutic field…). This work and its development aims to give a new perspective of human relation and learning experiences.

For the persons who are interested to get this double DVD, please take a contact with art aspects by email:  info@art-aspects.de

ENDLESS is a piece about the body and the human being in condition of violence and war. This work has been inspired from some strong experiences made during the project, especially from our visit of the concentration camps of Auschwitz in Poland.

Henrique Amoedo is the choreographer of our end-performance project. He has worked on the concept of the performance all along the project and the visits we made in the different partners´countries.

A lot of different people were in the group of dancers, mostly from Portugal but also from all countries involved in the project: Dancer of the company, dancers from the secondary group, people with and without disability (mental or physically disabled), blind dancer, children, all target groups and also people who never danced before have participated, as well as teachers, organisators, coordinator, manager of the different organisations, volunteers and various artists. For a lot of them it was their first time on stage.

Four persons were in the group of musicians.  They played live music and experimental pieces during all the performance.

The german componist Fabian Koppri (also assistant from Roland Walter) composed some parts of the music for the performance, and he played with Juliana Andrade and three other musicians from Portugal.

Alexis Camacho Vieira Fernandes is a singer from the target group of Portugal. In this performance he sang on the stage one of the main song (“Love Is Forever”), and danced also with the group.

The partners of Lithuania have also work on the songs for the performance. One singer of the target group (center for disabled children in Siauliai) was on the stage to sing two different variations of a song that he proposed us during our visit in Lithuania (music workshop, june 2011).

Roland Walter (disabled performer) and Sandie Brischler from the group of Germany realised together an acrobatic duo for the performance.

Filipe Ferraz is a film maker in Madeira, and he realises some experimental video montage showed during the performance. He used also some videos realised along the project in the different countries.

The painted silk we have realised during our workshop in Estonia was exhibited in an installation in the entrance of the theater. 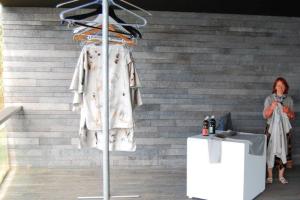 Mauricio (group of Portugal, responsible person for the stage and the technique) and the partners of Poland haved worked together for the technique of our performance in the theater.

The partners from Poland created with their target group a scenary for the stage, inspired from the holocaust monument in Berlin.

During the performance they were responsible for the standing up of this stage elements, and also for the lights, in collaboration with Mauricio. 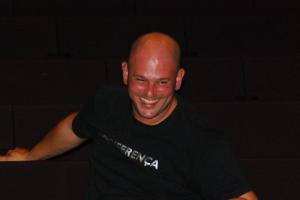 Fatima is a volunteer from the group of Portugal, and she helped also for the technique of the performance.

Luisa Aguiar made an incredible work to organise each detail of this meeting in Madeira for the whole group, and she was also responsible for the hudge organisation relating to our performance project. Luisa was also one of the dancer in the performance.

Pedro and Raquel, from the group of Portugal, have also helped a lot for the whole organisation during this intensive week with the partners.

Thomas Epping and Sandie Brischler, from the group of Germany, are responsible for the documentation of the project.

Thomas Epping was the photographer of the meeting, and Sandie Brischler (coordinator) is responsible for the final film of the performance.

The partners and the different target groups had only a few days in Madeira to make the rehearsals together with the group of Portugal and their participants. We have worked together every day, getting to know each other and be a part of this common creative work mixing all kind of people.

The partners were quite impressed to see the work of the portugese group to bring all these people together and create such a piece (Henrique Amoedo and his group). It was for all of us a very deep experience to have been a part of this process.

In totally, more than 40 persons participated to the rehearsals and to the end-performance.

All the partners of the MAMA Project have met for the last time on the island of  Madeira (Portugal), to prepare and realise the common performance ENDLESS (final project) with the “Dancing with differences” group, our partner.

We are about to realise our end-performance project during our last meeting in  Madeira, in may 2012: It is going to be an interdisciplinary performance with disabled and non disabled performers, professional and not professionnal artists from all Europe: Dancers, musicians, singers, aerialist and video artists will perform together. On the stage there will also be some objects and creative works realised along the project in the different countries.

The partner of Portugal, the “Dancing with differences group”, is the leader of this performance and unique experience with participants and target groups from all partners´s countries. It is going to be a very intensive time for all of us, and a quite important event in Madeira.

The performance will takes place in the Theater “Centro das Artes Casa das Mudas” in Madeira, on the 11 may and 12 may, at 21h.

–Germany has worked on some experimental videos about the different experiences made during the project. These videos will be projected on the stage during the performance.

–Lithuania has works on some music pieces and songs.

–Poland has worked with his target groups on objects and constructions for the stage.

–Estonia has worked on a silk that will be shown on the stage and used for light projections.

-This performance won´t be possible without the very big work realised by our partner of Portugal,  for leading all the developpement of this common final creation:  The “Dancing with differences” group in Madeira made a great work to organise, coordinate, create and make possible this end-performance including all the partners and target groups.

We would like to thank them all very warmly for their engagement, their cooperative qualities, their flexibility, their ideas, their creativity, their incredible energy and especially for their precious collaboration to this project and its results.

During our meeting in Estland, we have visited the art school and working place of our partners of Estonia. The art school is situated in the ruins of the historical castle (built in 1272, burnt down in 1941). The courtyard of the castle houses a museum, the art gallerie pART and a handicraft workshop.

In the art school, there is a lot of different studios adapted to work with many technics like painting, ceramic, glas, silk…. The art school propose some courses and workshops in various artistic fields, for children groups as well as for adults learners and disabled people.

In the house there is also a shop where the product are sold, and an art gallerie where you can find regular exhibitions.

During our meeting in Estonia the partners have discovered together several workhops. The aim of the meeting was to realise the painting of a silk for our performance project.

In the first workshop, we have paint on the silk some symbols relating to our project (concentration camps of Auschwitz, hill of crosses of Lithuania, lines…) on over 50 meters silk.

We have worked with a special technic who allowed us to have some white symbols on a dark background.

After the workshop we decided finally to use this painted silk in our end-performance for some light projections and light effects on the stage.

The second workshop we made was a glas workshop. Ethel Hakkaja showed us the technic to be creative with glas and each partner created a personal composition.

The art school cooperate with the Voisiku Mental House in Poltsamaa, making art projects together, creating exchanges and giving some art courses and workshops for disabled learners.

Posted on November 27, 2011 by sandiebrischler

Our next meeting will take place in Estonia. It is our last meeting before the mobility in Madeira. We are going to visit our partners (art school, Põltsamaa association). The visit will be concentrated on the work with fabric, costumes and clothes, for our end-performance project in Madeira in may 2012.